Finally, after starting it far too late, I managed to finish this year's Christmas pantomime at 4:30pm this evening...

CHRISTMAS GREETINGS TO ALL!!

On behalf of all at Beaten Path Radio, I'd like to wish all our listeners our best wishes for the festive season, and good fortune for the new year...

Thank you for your continued audience!!

In celebration of a lost friend...

In a change to the normal friday night rock show, Hairy Trev will be dedicating a large portion of his air time on Friday, to the legacy of a great friend who would have been celebrating his 60th birthday this week.

Phil Iaderosa was born, 5th November 1959, and his birthday would have been this coming Tuesday. While it would have been possible to present this tribute show on that day, it has always been a day when his devoted wife, Dawn who would be on air.

However, Phil was always remembered for his own contribution to the radio on Friday nights when he'd host his oldies show. Despite his american nationality, Phil totally adored the Beatles in particular, along with many other bands and performers from that era, and with that in mind, I shall be dusting off the oldies to play the music he loved, along with additional contributions to the show, from the friends he left behind, and I'm hoping, for a very special guest to join me on air for a very special night.

I hope you will join us with some great music and memories of a friend to us all...

...And once again that means I'm faced with the headache of working out show times across the station as people change their clocks!

This would always be so much easier if everyone finished summer on the same day, but of course, in typical american style, our colleagues across the pond decide to be late joining the party... (KK- the second world war started in 1939!!!!!)😠

now with the added complication of LeHoop, from Argentina, where they don't bother with daylight saving (bloody good idea in my book!!!), it makes things more complicated!! All I can say is, thank god we don't have a DJ in Australia, as they change their clocks the opposite way!!!

Anyway.. having got the grumbles out of the way, please use this list to find out what time you can listen to your favourite shows in your area over the next 2 weeks... (And I apologise if I've got any wrong, please let me know!!!!)

Hopefully this will help people tuine in to their fave DJ's!
Posted by Beaten Path Radio No comments: 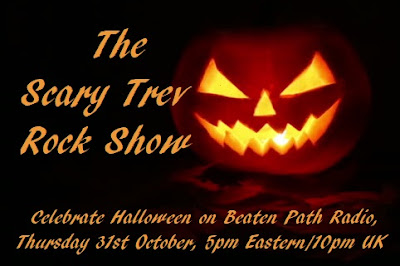 As we in the UK change our clocks a week before america, and Argentina can't be bothered to change them at all (bloody good idea in my view!)... please not the following CORRECTED TIMES for halloween...

In a seasonal change to his regular Friday Rock Show, Trev will be broadcasting on Thursday night, 5pm Eastern / 10pm UK with his special halloween show featuring a selection of topical songs for this time of year...
Expect ghost and goblins, witches and warlocks, werewolves, all included in a rocking soundtrack!

And to get you in the mood, tune in to the LeHoop Experience who will be playing his regular time of 2pm Eastern / 7pm UK and bringing his own twist to the halloween theme!
Posted by Beaten Path Radio No comments:


It is with great sadness today that I have to report the sad news that our great chat friend SB passed away last weekend following ongoing health issues.

Sheila had been suffering in recent times and underwent emergency abdominal surgery which was regrettably unsuccessful. She succumbed to the resulting infection in the early hours of Saturday morning, local time.

I personally didn't have the pleasure of knowing SB for very long, since she stepped up to report from NORAD and the disruptive elves on Christmas eve. She brought a fresh humour to this event and took up the role to perfection... a classic news reporter!!

Since then, in the chatroom on Friday nights she was an enthusiastic air drummer and always great fun with her close friend spookeh.

Many of you will have your own fond memories of Sheila and will feel her loss in your own personal ways.

On behalf of all at Beaten Path Radio, I would like to wish my sincere condolences to her neice "Bug", and all her friends and family at the very sad time...

Due to absence this weekend, the live "Hairy Trev Rock Show" will not be on air this Friday.

However, in a change to regular music, I will be broadcasting  a 2 hour long special of segments form the classic BBC radio comedy quiz show


Contestants are invited to speak on a given subject for 60seconds without repeating, deviating or hesitating while their opponents listen in to challenge and take over the subject.

Classic twists on the subject, wonderful comments and the witty arguments to justify their interruptions...

Sit back and prepare to be amused with 2 hours of comedy banter!
Posted by Beaten Path Radio No comments:
Older Posts Home
Subscribe to: Posts (Atom)